Shipping company Alfons Hakans trusted Steerprop to modernise the control system on Artemis, one of the longest-serving ASD tugs in the company’s fleet. Steerprop made the process quick, easy, and cost-efficient.

Back in 2019, the technical department at Alfons Hakans noticed a need to modernise and upgrade the propulsion control system on its Azimuth Stern Drive tug Artemis. It was no longer possible to get spare parts for its original control system; and although it was still reliable, for safety reasons the company decided to look for reasonable solutions for a full-scale upgrade.

“We noticed pretty quickly that it made sense to renew all parts related to the control of the propulsion units,” says technical manager Tuomas Raumanen. “Basically, everything between the master’s hands and propulsion units had to be replaced, including things like control levers, cables, computer units, and feedback sensors.”

Alfons Hakans began to look for suppliers, and Steerprop, located near Hakans’ headquarters, promptly gave a quotation. Raumanen notes that Hakans particularly appreciated the ease of communication and rapid responses, and this, topped with fast delivery and a reasonable price, made Steerprop an obvious choice.

The final order was confirmed at the end of 2020. First, Steerprop paid a few visits to get to know Artemis and its operations. During these visits, a timetable was set to ensure the downtime of the tug was kept to a minimum.

To decrease the amount of downtime, Hakans’ own workers and subcontractors started preliminary works, such as installing new cables and manufacturing foundations for electric cabinets, whilst the tug was still operating normally. Meanwhile, Steerprop was building the entire control system at their workshop.

“This way the installation time onboard would be as short as possible,” Raumanen says.

The installation began at the end of August. First, the old control system was dismantled, and the team ensured that all necessary cables had been installed. Next, all-electric cabinets related to the new system were installed, which was an easy process thanks to all the preliminary work.

Connecting the new cables to different units was the most time-consuming part, and it was completed on schedule. After seven days of work, it was time to run a test. During the sea trials, the adjusting of the final parameters was easily done as it had been considered already when planning the software.

From the beginning of the installation to final approval from Alfons Hakans, installing the new control system took nine days in total.

“After sea trials and final adjustments, our masters and chief engineers were satisfied and also surprised how well the whole process went,” Raumanen says. “Of course it takes a while before masters and others get used to the new type of control levers, but that’s common when changes are made to older vessels.”

The biggest advantages in comparison to the old system are, in Raumanen’s view, that all adjustments are very easy to make, and the new system is significantly more reliable. The information the system provides about the status of the propulsion units is also much easier to understand.

In total, Raumanen estimates the upgrade to add 10 to 15 years to the lifecycle of the vessel.

“All in all, we’ve been satisfied with the new control system and will continue our good relationship with Steerprop in the future,” he notes.

From Steerprop’s point of view, the co-operation with Alfons Hakans went extremely well. Technical Sales Manager Esa Peltomaa tells that Steerprop designers were in frequent contact with the personnel on board to ensure that the new system fitted existing spaces and locations as well as fulfilled the wishes of end-users.

Steerprop delivered a control system modified to existing propulsion, as well as a bridge control system with control levers, control panels, and relevant touch screens. Like Raumanen, Peltomaa says that the new system is more user-friendly than the old one, and it also conveys detailed information that makes service operations, changing settings, and calibrations easy and reliable.

“By modernising the system, Steerprop also provided a capability for remote service diagnostics, which gives Steerprop’s service department the ability to diagnose faults and status of the system remotely,” Peltomaa explains. “This makes better service assistance possible by diagnosing possible faults even before the first service engineer’s visit on board.”

Essentially, the vessel has now been future-proofed. For example, should Alfons Hakans want to replace existing units with Steerprop’s azimuth propulsors, the existing control systems can be fully utilised with minimal changes to further improve cost-effectiveness.

“Steerprop guarantees the serviceability for our products for decades by using and selecting components that are not becoming obsolete as well as designing the system well enough that future upgrades are possible with minimal work,” Peltomaa concludes.

Steerprop is a leading designer and manufacturer of azimuth propulsion systems for the most demanding applications and toughest conditions. Since its founding in Finland in 2000, the company has delivered fit-for-purpose units for hundreds of vessels, including every third icebreaker in operation around the world. Steerprop’s unrivaled arctic experience and fit-for-purpose solutions are a testament to the company’s commitment to continuous development, steadfast dedication to meet the customers’ needs, and an unwavering resolve to perform. 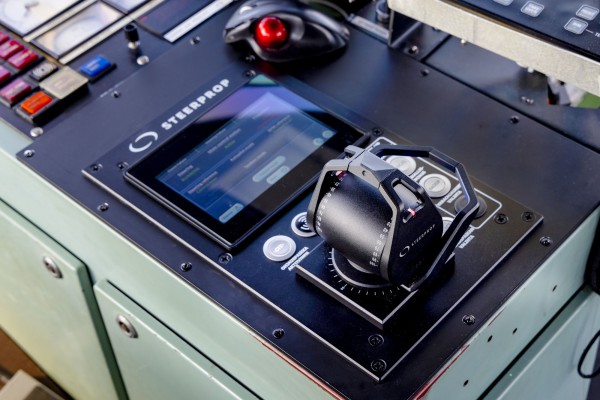 Steerprop is a leading designer and manufacturer of azimuth propulsion systems for the most demanding applications and toughest conditions.

Since our founding in Finland in 2000, we have delivered fit-for-purpose units for hundreds of vessels, including every third icebreaker in operation around the world.

Our unrivaled arctic experience and fit-for-purpose solutions are a testament to our commitment to continuous development, steadfast dedication to meet our customers’ needs and our unwavering resolve to perform.