Covid-19 emptied the offices, but after the first euphoria of teleworking, people are now feeling lonely working at home. It would, however, have been possible to safely continue working in physical teams with the aid of Genano’s innovative air purification system, which is the only one on the market to remove ultrafine particles down to 0,003 µm.

Genano’s air decontaminators use a patented cold-plasma technology based on powerful electronic air purification without any physical filters. The purifiers eliminate 99.999 per cent of the bacteria and viruses in indoor air, according to a recent scientific study conducted by the internationally acknowledged VTT Technical Research Centre of Finland.

“When the corona virus attacked the world last year, we kept on working in our premises, since we knew that the indoor air did not contain any viruses thanks to our air decontaminators”, says Niklas Skogster, CEO of Genano. “One could say that this is one of the safest working places in the world, at least when it comes to the air we are breathing.”

The principle behind Genano’s technology is simple: Contaminated air is led inside the unit, where the negatively charged particles are attached to the positive collection surface. The particles are then destroyed with high voltage corona discharges. In the last step a 3-layer active carbon collector removes VOC gases and odours.

“As the study conducted by VTT shows, the outgoing air is completely free from particles of all sizes, microbes, harmful gases and chemicals”, Skogster says. “There are no mechanical filters in the units that could be clogged, ensuring that the airflow is continuous at all times and that there is no need to change expensive filters. Also, the running costs are low. For example, the midsized Genano 350 uses about as much electricity as a conventional light bulb.”

The air purifiers building on Genano’s technology have been in production since 1999. They were initially developed for hospital use but are now widely used all over the world in a wide range of business areas such as offices, clinics, shops, restaurants, clean manufacturing areas, schools and nursing homes.

“Our technology has of course been improved during the years, so that the units are much smaller and lighter today”, Skogster says. “Genano 350 weighs only 17 kilos, so it is truly mobile and can also be hung on the wall.”

During the first six months of the Covid-19 crisis last year, many companies declared that remote working would be the new normal. But after over a year of struggling with the Covid-19 remote work blues, the attitude has changed. According to KPMG’s 2021 CEO Outlook Pulse Survey, only 17 percent of the CEOs surveyed is still thinking of downsizing their company’s physical footprint on a permanent basis. In a similar survey in August 2020 the number was as high as 69 percent.

“Because of Covid-19, we have had a tremendous boost in our sales during the last 12 months, but the world is still a long way from what could be called a ‘normal’ situation”, Skogster says. “The transition to a more normal working situation could, however, be sped up by using efficient air purifiers much more widely than today.”

Skogster points out that Genano’s decontamination units are future proof, and that they could greatly improve both the health of the employees and the profitability of a company when times are more normal again.

“Viruses come and go, but no matter what type they are and how they mutate, they don’t survive the 25 000 volts that our air purifiers discharge”, he says. “A study by Laboratoire National d’Essai in France shows that the microbes in the air were completely destroyed half an hour after the device was switched on. The bottom line is that healthier people work more effectively.”

The mobile virus killer. Genano 350 indoor air decontaminator is truly mobile, since it weighs only 17 kilos and has a small footprint. To start using it, you just plug it in to a power outlet and turn it on, says Niklas Skogster, CEO of Genano.

Safety at work. The staff can move freely in offices equipped with Genano’s air purifiers, since the air is being disinfected from viruses 24/7. The company’s CEO Niklas Skogsteris having an informal chat with Marketing Manager Marjo Paija. In the background, Indoor Air Specialist Antti Kinnunen is talking to Sales Manager Tommi Mikkonen.

Talking face to face is nicer than talking mask to mask. The yellow machine behind the table is Genano model 350, which continually decontaminates the air in the meeting room, where CEO Niklas Skogster (to the right) is having a meeting with Chief Operating Officer Aleksi Ahti and Sales Manager Tommi Mikkonen.

Genano is a spin-off from the scientific world and was founded in 1999. It operates currently in over 30 countries worldwide and is an international leader in indoor air decontamination in a wide range of business areas. The company’s patented cold-plasma technology is based on powerful electronic air purification that eliminates all living microbes, such as viruses and bacteria down to nanometer size. The decontaminators are available in three sizes, the 200- 300- and 500-series. Located in Espoo, Finland, the company have offices also in Belgium, Germany, Sweden, Italy, China, Taiwan and Canada, and in addition a global network of distributors. 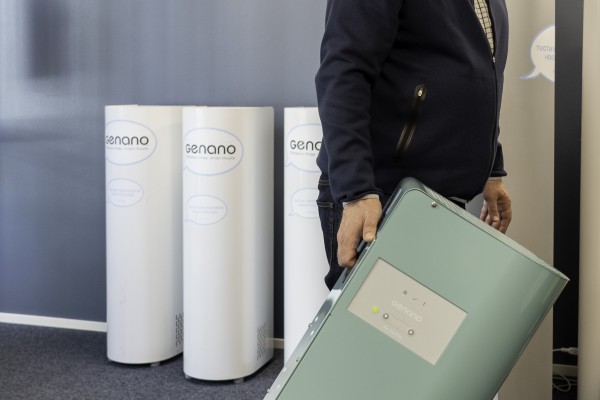 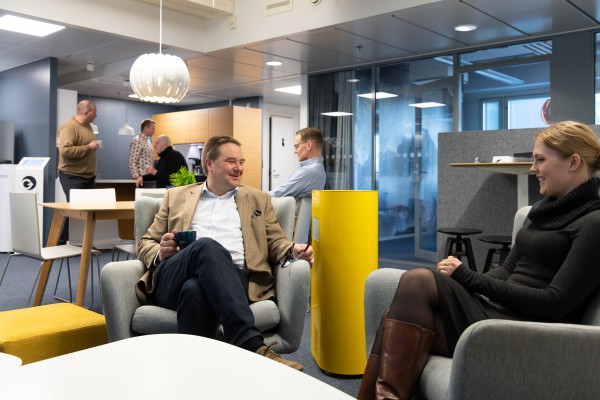 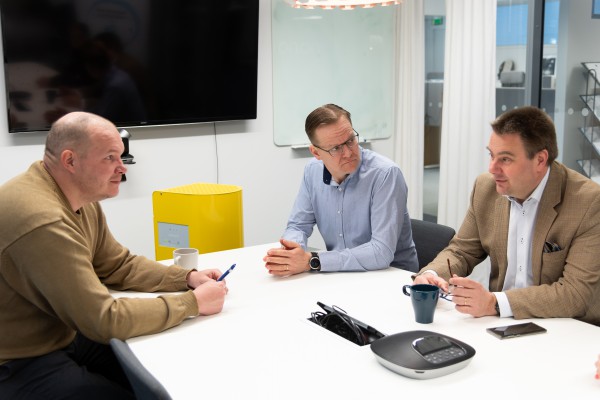 Genano is a spin-off from the scientific world and was founded in 1999. It operates currently in over 30 countries worldwide and is an international leader in indoor air decontamination in a wide range of business areas. The company’s patented cold-plasma technology is based on powerful electronic air purification that eliminates all living microbes, such as viruses and bacteria down to nanometer size. The decontaminators are available in three sizes, the 200- 300- and 500-series. Located in Espoo, Finland, the company have offices also in Belgium, Germany, Sweden, Italy, China, Taiwan and Canada, and in addition a global network of distributors.