In collaboration with the four companies, a process has been developed to be the first in the world to produce compostable bioplastic from food and feed production by-products. A biopolymer plant is being built in the new city to pilot the production of bioplastics on an industrial scale.

Finnfoam, Brightplus, VTT and Nordic Soya have studied the possibilities of soy molasses, which is a by-product of soy processing, as a raw material for the future. The research project, partly funded by Business Finland, lasted four years.

“The process innovation created as a result of the collaboration project is the first in the world to produce an organic lactic acid polymer from the by-products of soybean production. In this way, a more sustainable alternative can also be offered to lactic acid polymer produced from sugar and maize, or PLA, which uses virgin raw materials, ie cultivates bioplastics, not for food production, ”says Henri Nieminen, CEO of Finnfoam .

Inedible soy molasses has previously been disposed of by incineration. The production of biomaterials from the by-products of food production also improves the profitability of production.

Nordic Soya Oy uses soybeans grown in Europe at its Uusikaupunki plant. Soy molasses, which remains as a residue in its processing, has been used as a raw material for research. Domestic innovation combines synthetic biology, chemistry and materials technology in a completely new way.

“The project is both an excellent example of what can be achieved with industrial biotechnology know-how and a masterpiece of transforming a challenging industrial residue into a higher value product using microbes. The task has required significant technological effort at various stages of the process. VTT's expertise in synthetic biology, microbial modification and optimization of bioprocesses has been utilized in particular, ”says Tiina Nakari-Setälä , VTT's Strategy Director .

An ecological alternative to plastic

The domestic, ethically developed concept of organic raw material development and production can be expanded to new markets in the future, where soybeans are processed for food and feed production. Indeed, bioplastics from soybean processing residues have huge potential as a scalable export product for the circular economy: Globally, residues from soybean production could produce around 22 million tonnes of bioplastics annually.

Bioplastic, which is also known for medical applications, is also excellently suitable for the production of various compostable packages and, for example, as a filament for 3D printers.

The plant will be operational by the end of 2023

In order to pilot new biomaterial innovations, companies are starting a pilot plant project in Uusikaupunki in connection with Nordic Soya Oy, Europe's largest soybean refinery. The pilot plant will be built during 2021–2022.

The full-scale plant is planned to be commissioned by the end of 2023.

At the beginning of 2021, Finnfoam Oy was divided into two companies, of which FF-Future focuses on future solutions. The pilot plant project to be launched now is FF-Future's first major investment.

"Finland has great opportunities to become a pioneer in biomaterials, but this requires resources in Finland to test the scaling of the production process. We want to be involved in building concrete resources for the industry's domestic ecosystem, and look for players with Nieminen.

Brightplus Oy, which is responsible for coordinating the project, together with its partners, produces new innovations in green chemistry that can be tested at the pilot plant.

“With our expertise, we can modify many properties of an ecological biomaterial, such as transparency and film formability, or, on the other hand, improve its chemical resistance and reusability. We are now looking for pioneering partners interested in great materials technology, with whom we can develop more new innovative applications for biopolymer utilization. ”

Henri Nieminen, the initiator of the project, thanks Brightplussa and VTT for the technical success of the project, which have developed a working concept from thousands of options and Business Finland, whose financial support has been a vital condition for the project's success.

Director of Development and Marketing

Finnfoam Oy is a Finnish family business with deep roots in Finnish frost. Our solid experience of almost 40 years and a new kind of development-oriented thinking have made the company one of the leading manufacturers of plastic-based thermal insulation in the market area around the Baltic Sea. The evolving Finnfoam has increased its entire 21st century production capacity and product range. Finnfoam is able to offer its customers patented solutions whose unparalleled insulation capacity, reliability and ease of installation. Today, the company's product range includes all the hard and non-moldable thermal insulation FINNFOAM (XPS), FF-EPS and FF-PIR and Tulppa wet room panels commonly used in the world. Read more: www.finnfoam.fi/

Brightplus is a Finnish company producing bio-based materials. Our products include melt-processable materials to replace fossil-based plastics with both barrier and water-based coatings. In accordance with sustainable development and the circular economy, we utilize the by-products of various industrial sectors from the forest industry to agriculture in our BrightBio products. We innovate products together with our customers to directly suit their processes and applications in a wide range of industries. Read more: www.brightplus.com/

VTT Technical Research Center of Finland is a visionary research, development and innovation partner. We take on global challenges and create opportunities for sustainable growth. We help society to develop and companies to grow through technological innovation - we think beyond the obvious. We have nearly 80 years of experience in cutting-edge research and science-based results. VTT creates impact when innovations and business meet. Read more: www.vttresearch.com

Nordic Soya Oy is the largest and most modern multi-stage soybean refinery in the EU, with a production capacity of more than 240,000 tonnes of soybeans per year. The company produces responsible soybean meal, soybean oil, soybean protein concentrate (SPC) and soybean molasses, as well as heat-treated rapeseed / rapeseed meal from nearby raw materials. The company's main market is the feed and food industry in Northern Europe, where customers are especially the organic fish feed and other food and technology industries. The company is Europe Soya, Pro Terra and FoodChainID non-GMO certified and is a member of the Round Table on Responsible Soy organization. Nordic Soya promotes more efficient and sustainable food production and Finland's protein self-sufficiency. Read more: www.nordicsoya.com/ 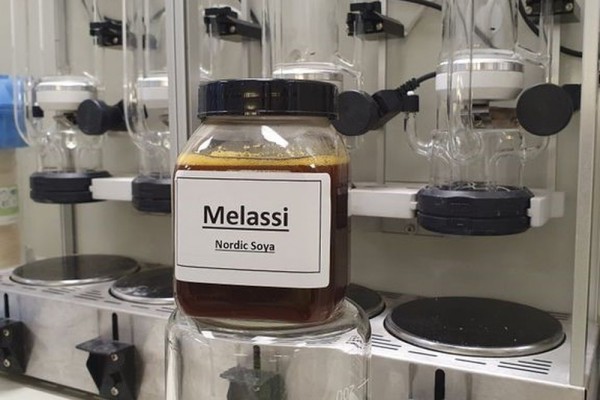