Today, the Office of the Federal President announced the nominations for the German Future Prize (Deutscher Zukunftspreis) at the German Museum in Munich. ZEISS experts Dr. Thomas Kalkbrenner, Dr. Jörg Siebenmorgen and Ralf Wolleschensky have been nominated for the 2022 German Future Prize. Their project: the innovative microscope ZEISS Lattice Lightsheet 7 for the gentle 3D imaging of living cells. By combining imaging that protects samples with high resolution, the system allows researchers to observe subcellular dynamics in 3D over hours and days, which was not previously possible with other microscopy technologies. This opens up new possibilities, such as for cancer research or understanding life at its earliest stages. With this award, German President Frank-Walter Steinmeier honors scientists and their innovations that unlock scientific potential and create jobs.

ZEISS Lattice Lightsheet 7 enables, for the first time, biomedical researchers to observe living cells live and in 3D for hours or even days. They study how, for example, the cells react to certain active agents, or what happens when viruses or bacteria enter cells.

"Especially with infectious diseases, studies must be conducted on a living system if you want to gain new insights," says Kalkbrenner, speaking on behalf of the team. The team involved potential users at an early stage of development. They then tested the system and provided valuable input. For example, one group used the system to study the malaria parasite, which is responsible for almost half a million deaths annually according to the World Health Organization (WHO). The research group from Melbourne, Australia, was one of the first to use the system. With ZEISS Lattice Lightsheet 7, they were able to capture this parasite, which is only one µm in size, as it invaded a living blood cell. For the first time, it was possible to study different stages of this highly complex parasite's life cycle live and in 3D.

In cancer research, too, scientists have already gained new insights with ZEISS Lattice Lightsheet 7. Prof. Markus Sauer from Julius Maximilian University in Würzburg studies immunotherapies, which potentially offer better chances of survival. Immune cells are removed from patients and reengineered so that they can better identify the tumor cells. These more effective CAR-T cells are then infused back into the person being treated. "An exact understanding of the interaction between these CAR-T cells and tumor cells is decisive for optimizing personalized immune therapy in terms of impact and minimal side-effects," says Sauer. "Here, lattice light sheet microscopy, with its ability to capture individual molecules, plays an especially important role."

Reining in the laser

The problem for researchers studying living cells with fluorescence microscopes used to be the illumination: the intensities of the laser radiation used are higher than those of the sun by a factor of 1000 or more. This intense illumination can permanently damage living cells. A significant reduction in this photo damage is achieved with light sheet microscopy: unlike all other microscopes, the laser beam – in the form of a light sheet – is applied only in the area within focus of the objective lens. While this works well for larger organisms, the laws of optics still prevent the transfer of this technology to cell biology. "We have to rein in the laser in a special way so that light only goes where a researcher wants to look and without unduly damaging cells," explains Kalkbrenner. "So we built on the idea of lattice light sheets from Nobel Prize winner Eric Betzig and took it further."

Looking through the glass at an angle

On top of this, the team had to completely rearrange the objective lenses because the cells grow on the cover slips in culture vessels like Petri dishes or multiwell plates. They developed a completely new type of microscope optic that enables a person to look through the sample vessels ‒ at an angle and from below ‒ at the cells inside without artefacts. Especially the multiwell plate formats, which are so important for the development of active agents in the high content screening process, are accessible to a light sheet microscope for the first time. All this has been developed to create an easy-to-use, compact system with high automation potential.

"We are delighted to be nominated for the German Future Prize. It is a nod to ZEISS' significant innovative strength, and it reflects the enthusiasm for development and the courage for innovative thinking that permeates and unifies the segments of the ZEISS Group," says Dr. Jochen Peter, Member of the Executive Board of the ZEISS Group. "Scientific breakthroughs succeed when companies and top researchers collaborate as part of a network. Here at ZEISS, the link between science and industry has grown throughout our history, and it is firmly anchored in the company's structure."

Honoring innovative achievements in engineering and the life sciences

The German Future Prize – the German President's Award for Innovation in Science and Technology – has been presented annually since 1997 and is one of the highest accolades for scientific achievement in Germany. It honors exceptional achievements in technology, engineering and the life sciences as well as software and algorithms that have resulted in viable products. Every year, the prestigious jury for the German Future Prize handpicks three research teams from a vast array of projects in a multi-stage selection process, and each team's innovation is shortlisted for the award in the final round of the competition. Alongside their innovative achievements, the jury also evaluates the development's economic and social potential. The award will be presented in Berlin by German President Frank-Walter Steinmeier on 26 October 2022.

Further information on the nominations and the German Future Prize at: www.deutscher-zukunftspreis.de

Innovation as part of the corporate identity

Innovation is a way of life at ZEISS. You might say it is in the company's genes. As part of the corporate strategy, it is always placed within the context of society as a whole, and it forms the basis for further growth at the ZEISS Group. That is why ZEISS invests 11 percent of its revenue in research and development work.

Optical technologies are vital when it comes to making progress in the life sciences, medicine, IT, telecommunications, automotive, consumer and many other fields. All ZEISS innovations aim to meet future customer needs with products, services, solutions and business models as well as offer added value and benefits.

For its customers, ZEISS develops, produces and distributes highly innovative solutions for industrial metrology and quality assurance, microscopy solutions for the life sciences and materials research, and medical technology solutions for diagnostics and treatment in ophthalmology and microsurgery. The name ZEISS is also synonymous with the world's leading lithography optics, which are used by the chip industry to manufacture semiconductor components. There is global demand for trendsetting ZEISS brand products such as eyeglass lenses, camera lenses and binoculars.

With a portfolio aligned with future growth areas like digitalization, healthcare and Smart Production and a strong brand, ZEISS is shaping the future of technology and constantly advancing the world of optics and related fields with its solutions. The company's significant, sustainable investments in research and development lay the foundation for the success and continued expansion of ZEISS' technology and market leadership. ZEISS invests 13 percent of its revenue in research and development – this high level of expenditure has a long tradition at ZEISS and is also an investment in the future.

With around 37,000 employees, ZEISS is active globally in almost 50 countries with around 30 production sites, 60 sales and service companies and 27 research and development facilities (status: 31 March 2022). Founded in 1846 in Jena, the company is headquartered in Oberkochen, Germany. The Carl Zeiss Foundation, one of the largest foundations in Germany committed to the promotion of science, is the sole owner of the holding company, Carl Zeiss AG. 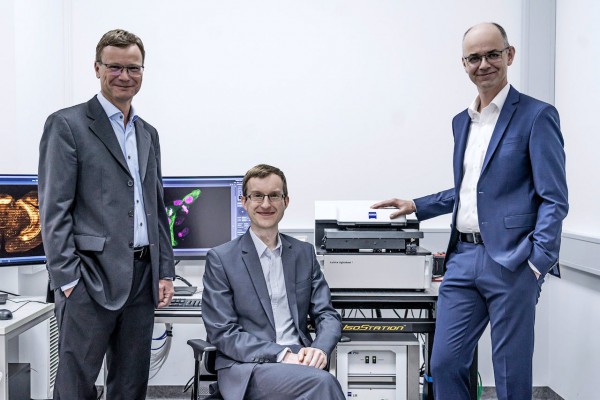