The technology group Wärtsilä will supply the engines for two new pusher tugs being built for the Brazilian operator Hidrovias do Brasil at the Uzmar Shipyard in Turkey. There is an option for an additional two vessels. The Hidrovias fleet already includes a number of vessels operating with Wärtsilä engines, and their operational dependability and competitive lifecycle cost were cited as key considerations in the award of this latest contract, which was signed in the second quarter, 2021.

The new 46-metre long tugs have been designed by the Canada-based naval architects and marine engineers Robert Allan Ltd. The vessels will operate along rivers in northern Brazil, often in remote locations and challenging operating conditions. The engines’ reliability and efficiency is, therefore, of paramount importance.

“As one of the largest providers of integrated logistics solutions in the Northern Corridor, this project is important for the growth and strengthening of our company. We are always looking for partners who can assure us of efficiency, sustainability and reliability. Wärtsilä was the best choice for this project,” says Mariana Yoshioka, Director of Engineering, Innovation and Operational Planning. at Hidrovias do Brasil.

“We are pleased to have once again been selected as a major equipment supplier for the Hidrovias fleet. We have established a very strong relationship with the customer, and our track record with previous engine deliveries has clearly led to this latest order,” says Mário Barbosa, Senior Sales Manager, Wärtsilä Marine Power.

Hidrovias do Brasil is an integrated logistics company focused on taking advantage of waterway transport throughout Latin America. In the Northern Logistic Corridor (Miritituba-Barcarena, Pará), the company offers an integrated logistics alternative for the transport and outflow of grains in the Midwest region of Brazil, in addition to the cabotage operation for transporting ores. For these operations, more than R$ 2 billion were invested in the region, which has the capacity to move more than 7.0 million tons of grain per year. In the Southern Logistics Corridor, the company operates through the Paraguai-Paraná Waterway, having handled nearly 3 million tons of various cargo in 2020, such as agricultural commodities, ores, fertilizers, cellulose, among others. Hidrovias do Brasil was founded in 2010 by the infrastructure fund of Pátria Investimentos, and was listed on B3 (Brasil, Bolsa, Balcão) in September 2020, in the Novo Mercado segment, which includes companies with the highest governance standards of the São Paulo stock exchange. 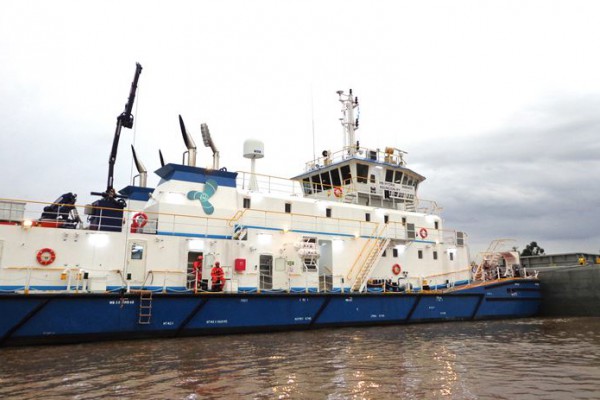